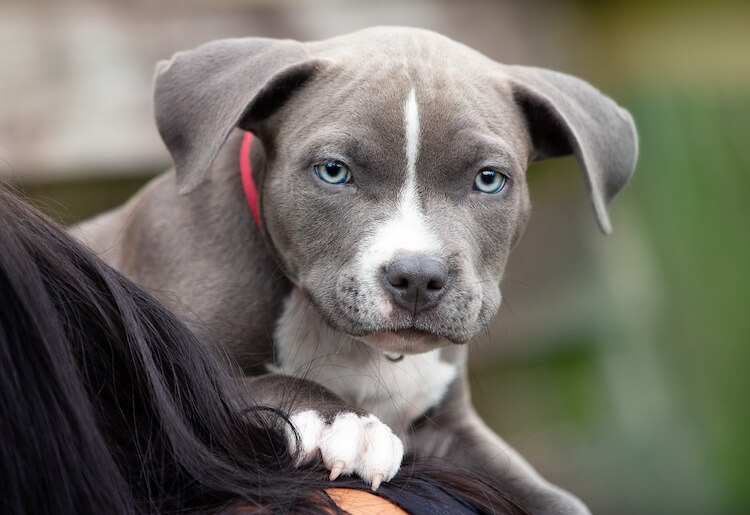 Although the Blue Nose Pitbull is a purebred American Pitbull Terrier, it is distinguished by having a blue nose. Although it’s becoming more common among breeders, the Blue Pitbull puppy is still difficult to find and isn’t any different from other pit bulls. We’ll go over everything you need to know in this guide, from his background to his health, his personality to his need for exercise.

Why The Blue Nose?

The defining characteristic of a Blue Nose Pitbull is a rare blue-gray hue to the skin, eyes, nose, and toenails.

Even Red Nose Pitbulls are available, which are distinguished by their amber-colored skin, eyes, noses, and toenails. And no, these little creepy aliens or demon-looking dogs in blue and red are not what they appear to be!

When two parents with recessive coat-color genes cross, which doesn’t happen frequently in nature, striking blue or red coloring results. After all, Pitbulls with these recessive genes are rare, and it is even more unusual for two to cross the same doggie path!

These recessive genes trigger decreased melanin production. The key component of the skin that determines skin color is melanin. It is the cause of how people tan in the sun!

Because so many people prefer unique pitbull coloring, some breeders force recessive-gene Pitbulls to breed together. It should sound a little sketchy if it does. But more on that is in #3.

For now, you should know that Blue Nose Pitbulls are not a separate breed. They fall under the American Pitbull Terriers category, which the American Kennel Club does not recognize.

This breed, regrettably, has a murky past. Furthermore, his past is what has had such a detrimental impact on his present. His ancestors came from England in the 19th century, across the pond.

They were used in dog fights against bulls, rats, and other dogs for betting. The blood sport was chosen for these dogs because of their terrier tenacity and formidable strength.

The human ringleaders flew them to America where they continued the sport for a while after it was outlawed in England. The breed’s largest individuals were crossed to produce the American Pitbull Terrier, which is now the largest variation of the breed.

They are no longer used in dogfighting today. Instead, they make fantastic herders, and even better than this, family companions.

When the first canine with this coloring first appeared is unknown. But it’s likely that a blue-nosed Pitbull wasn’t too far behind a typical black-nosed Pitbull when it came to birth. Since that time, we have been captivated by life’s more unusual things. And as their Pitbull reputation is slowly improving thanks to awareness and education, dogs with this coat color are becoming more popular than ever.

The American Pitbull Terrier with a blue nose is essentially the same as any other Pitbull. with the exception that his nose is blue. Blue as in Smurf blue is not what we mean when we say it. We are referring to diluted black instead.

This can be dark gray to light gray in color. His flower-shaped ears and broad, cheeky grin frame his nose. His tail is long, thin, and points to the sky. His head and nose are square in shape.

Blue-nosed Pitbulls tend to inherit the complimentary blue coat too, with silver or blue eyes. Cream, black, brown, brindle, or any variation of these colors are traditional American Pitbull Terrier colors. He needs very little grooming because of his short, shiny coat.

These pups typically measure between 17 and 21 inches, from paw to shoulder, and he will weigh between 50 and 65 pounds. He now has a medium to large dog body size, and he looks athletic and stocky. He will appear to have muscles on his muscles if given a high-quality diet and regular exercise.

While Blue Nose Pitbulls have a reputation for being aggressive and thus sound like they would make excellent guard dogs, they are more likely to want to play with an intruder than to defend the house.

The Blue Nose Pitbull is loving, affectionate, and friendly like all Pitbull Terriers. They are well known for being exceptionally gentle with children and can make the ideal family dog if properly raised. They have a lot of energy and love to hike, run, and play because they are active, making them the ideal walking partner.

They thrive when they are around people, so they struggle when left alone. They can chew on almost anything thanks to their strong jaws, so they’ll chew on your furniture to vent their frustration at being left alone! For the same reason, they enjoy barking too.

The emotional power of The Blue Nose Pit can lead to some obstinacy. But if you give these puppies the right training, you won’t notice any undesirable behavior or emotional outbursts from them. Later, we go into more detail about how to train these dogs.

Because of their devoted nature, Blue Nose Pitbulls are frequently used as therapy dogs in the US. Despite their loyalty, they lack strong territorial or protective instincts. They get along with everyone as a result, even strangers.

These pups are energetic dogs who need at least 60 minutes of exercise every day. This dog needs to release all of that intense energy he has, come rain or shine, without fail. He will become problematic, out of control, and destructive if given no outlet. Which one of your favorite chairs? With a bored pup, it has no chance.

In addition to this, he also needs interactive playtime throughout the day. His brain is stimulated, and he is kept busy, and this will strengthen your relationship with him. For the sake of his happiness, be sure to buy a ton of indestructible dog toys because these puppies are tough cookies and require tough toys.

He is an eager-to-please dog who will pay attention to everything you say because of his tenacity and loyalty. This puppy is a joy to train with consistent training. All you require is a perfect “who’s a good boy?” and a few treats on hand.’ squeaky voice. Be sure to read up on the positive reward training method, and he’ll be obedient in no time.

Socialization is key with these pups, because of his dog-fighting history. He is one of the friendliest dogs around if properly socialized. But if you don’t, you’ll be in trouble. He will be socialized before you buy him from reputable breeders. To build his confidence, make sure to keep doing this by exposing him to different dogs and unfamiliar situations.

These puppies differ slightly from the typical black-nosed Pitbull in terms of their health. This is all the more reason to work with a reputable breeder who will do their best to produce the healthiest puppies possible.

Sadly, studies indicate that low melanin levels are the cause of the mutated gene that gives rise to the light blue color.

The pigmentation of the skin, hair, and eyes is referred to as melanin. Low melanin levels can cause other health concerns, such as skin conditions, heart diseases, eye conditions, lower immunity, and a higher chance of developing cancer.

If you’re looking for a blue-nosed Pitbull, keep this in mind. Because his life might be a bit more troublesome compared to a traditional black nose. Additionally, the price of insurance and veterinary care may increase slightly.

But thankfully, the American Pitbull Terrier breed has a very high level of health. Skin allergies and hip dysplasia are the two most prevalent problems. Cerebellar abiotrophy, which can limit his mobility, is also present in the breed, though it is less common. He usually enjoys a long lifespan of 12 to 16 years.

Premium Pitbull dog food that will keep him full throughout the day is required for their kibble. You should try to feed him kibble with at least 25% protein because a high protein kibble is preferred. He will also probably eat around 1,100 calories per day, which equates to 2 ½ cups of food, and more if he is a working Pitbull.

Skin allergies are more common in this breed variation than in a typical black-nosed Pitbull. As a result, it’s important to always pay attention to how his skin is doing because what you put in his bowl can have an impact.

Take him to the vet if you notice that he is scratching his skin more frequently than usual, if his skin is red or inflamed, or if he is balding in patches. These are all signs of an allergic reaction, and it could be his food.

As a result of recessive genes, the Blue Nose Pitbull has a distinctive, lovely coat. Sadly, some health issues that are absent in other Pitbulls can arise from this lighter coat.

Unfortunately, a lot of these problems are actually brought on by breeders’ own poor breeding practices.

This medium-sized dog breed requires roughly 30 calories per lb of body weight, which means that their daily caloric needs fall between 900 and 1800. The weight of a Blue Nose Pitbull can vary from 30 to 60 lbs, with males typically being larger than females.

As with any dog, the Blue Nose Pitbull should eat a balanced diet. For this puppy, dry kibble is ideal.

While you should always check the back of the food packet to see how much of a specific food you should be feeding your Pit, as a general rule, it should be about 1.5 to 2.5 cups per day, divided into two meals.

The quantity you feed them will vary depending on the type of food, the dog’s size, age, level of activity, and other factors. Although Blue Nose Pitbulls have a stocky, muscular build, be sure this doesn’t just mean they are obese. Both their ribs and waistline should be discernible to you. 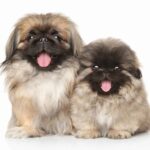 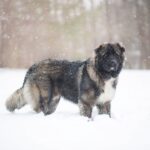 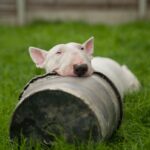 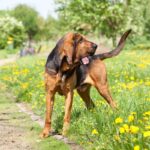